In an overhead transmission line, the atmospheric air in between the conductors behaves perfectly like an insulator when the potential difference between the conductors is small. With the increase in system voltage, there is a corresponding increase in the electric field intensity. When the electric field intensity or voltage gradient reaches a critical value of 30 kV/cm, the air in the immediate vicinity of conductors no more remains a dielectric but it ionizes and becomes conducting.

Corona phenomenon is the ionization of air surrounding the power conductors. Free electrons are normally present in the atmosphere. The free electrons will move with certain velocity depending upon the field strength.  These electrons on their movement collide with the molecules of air and liberate more electrons. The process of ionization is cumulative and ultimately forms and electron avalanche.

At voltages above 300 kV, corona causes a significant power loss and radio interference if a single conductor per phase is used. Instead of using a single conductor, it is preferable to use two or more conductors per phase, in close proximity, which is called bundled conductors. 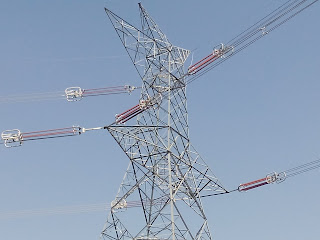